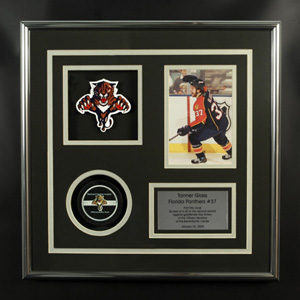 Posted at 12:42h in Success Stories by admin 0 Comments
0 Likes

So what do you give an NHL rookie who scores his first goal in the NHL? A custom plaque from Winners Award Group. That’s right, when the Florida Panthers were looking for something special to commemorate their rookies’ first goals in the National Hockey League they immediately called Winner’s Award Group for some new and exciting ideas. After visiting our website they recognized a modern looking silver plaque that they were interested in. Within a few hours Winner’s Award Group’s graphic artists had created a virtual sample of a plaque and game photo of the player complete with information on the player, time of the goal, date and who he scored against.

One week later they sent us the puck, and another week later they had the finished product. Now thanks to Winner’s Award Group, Panther rookies have a lasting memento of their first goal, in fact the Panthers even order them for any player who scores a hat trick.